Manuscript account of the sufferings of Gleyo in China

A manuscript written in a single, unidentified hand during the last years of the 18th century, describing Gleyo's imprisonment in Ching-Tou, then Yuin-Tchang.

J.-F. Gleyo was born in Saint-Brieuc, the son of master mariner François Gleyo, and became a Priest of St. Sulpice. He sailed from Lorient to China in 1764, first arriving in Macao, where he learned Chinese and became associated with the evangelical work of the missionary Alary. In 1769 he was denounced and accused of links with the Pélén-Kiao rebels. Imprisoned and abused for several years, he owed his survival to his faith and mystical visions. He was released in 1777 after a Portuguese Jesuit mathematician intervened with the Emperor and resumed his apostolic labours. In his General History of the Foreign Missions, Launay states of Gleyo that "he recalls the great contemplatives, the most intrepid apostles, saints, and other confessors of the faith." The present manuscript recounts his encarceration and the consolations he received from heaven. It is sprinkled with Latin sentences and Chinese terms (especially in his letters written to Jean-Martin Moÿe after his release, included as a final section at the end of the second volume, with separate page numbers). The letters were published in the famous Jesuit collection of "Lettres édifiantes et curieuses". The original manuscript is kept in the Archives des Séminaires des Missions Étrangères, and a copy by various hands exists in the library of the Seminary of St. Sulpice; it is very likely that the present manuscript was copied from one of these sources. It is not listed in the catalogue of Manuscripts in the National Library and is thus of the utmost rarity.

Provenance: from the library of Jean R. Perrette with his bookplate on the pastedown. 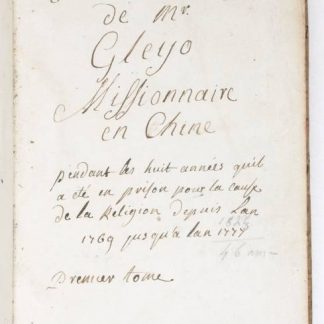