First edition. "Collated with a manuscript in the library of the Elector of Brandenburg, preface, geographical index, glossary, etc." (Lust). The gifted orientalist Andreas Müller (1630-94) compiled in a single volume this collection of travel accounts and information on China: Part I is an edition of a Berlin manuscript of Marco Polo, including comparisons with editions by Grynaeus (1532) and Ramusio (1559). Part II, often bound last, is an encyclopedia of China by Müller, listing "Chinese peculiarities" based on Chinese and oriental sources (cf. Löwendahl 153). Part III is a Latin version of "Historia orientalis" by the Armenian Hayton of Corycus (d. 1308).

According to Lach, Müller was “one of the most cosmopolitan of [...] world-conscious Europeans” of his time, although he never travelled outside of Europe. He fell out with Kircher over a linguistic issue, and when Chinese writing was described by theologians as a breach of the Second Commandment, his position in Berlin became untenable. Having resigned his position as provost of St. Nicolai in 1685, he relocated to Stettin and spent the remainder of his life with private studies. "By his own ways of publishing he much hampered the production of a bibliography of his works, which would certainly warrant scrutiny. Before his death he destroyed his manuscripts. He negotiated over the sale of his library with numerous universities, but finally, on a whim, gave away a mere 50 books to the Stargard Consistorium in 1692; most of his books and the remainder of his papers he willed to St. Mary's collegiate church in Stettin" (cf. ADB XXII, 513f.).

Some browning and spotting throughout. Still a fine copy from the library of the Ducs de Luynes at the Château de Dampierre: their bookplate reproducing the arms of Charles Marie d'Albert de Luynes (1783-1839), 7th Duc de Luynes, on pastedown; latterly in the library of Jean R. Perrette (his bookplate). 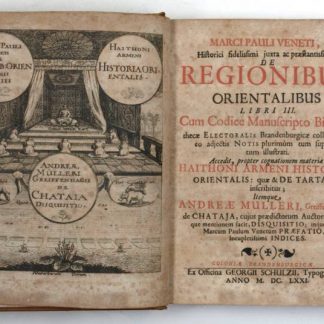