First edition of this Syriac textbook, including one of the earliest investigations of the Samararitan language and script. "It is the least developed among the Semitic languages, closest to Syriac, but coarser, even less sophisticated. The Samaritan population has greatly dwindled; their capital is Nablus in Palestine, but there are also some in Damascus, Cairo, Acre and other places. Their common language is Arabic" (cf. Vater/J.). The Utrecht philologian J. Leusden (1624-99) studied philosophy in his hometown, then focused on theology and the oriental languages. He was ordained as a preacher in 1649. He subsequently moved to Amsterdam, where he took instruction in Hebrew and Talmudic scholarship from various Jewish teachers, including one of Arabian descent, and thus acquired such learning that he succeeded to the Utrecht chair of Hebrew and Jewish Antiquities in 1651 (cf. Jöcher 2409). 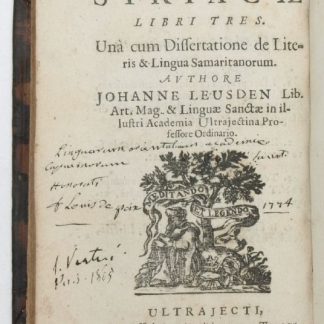