The astrology of carrots and related root vegetables, by an eccentric and colourful charlatan travelling in Egypt and Asia Minor: rare coloured copy

Folio (255 x 381 mm). (12), 156 [but: 158], (24) pp. With the title in a large and elaborately decorated woodcut, 36 large botanical, 12 large astronomical and about 112 small woodcut illustrations in text, and the author’s woodcut heraldic device above the colophon, nearly all coloured by a near-contemporary hand. 17th century gold-tooled, dark brown tanned sheepskin.

Elaborately coloured copy of the first German edition of a bizarre astrologico-botanical work, translated from the Latin edition published earlier that same year, by the Basel-born Berlin physician, alchemist, astrologist, botanist and linguist Leonard Thurneysser (1531-96). It discusses astrological influences on the growth, composition and medical efficacy of plants, and includes an index of plant names in the usual Latin and German, but also more interestingly in Hebrew, Syriac, Arabic and Persian. "Hand-colored copies [...] are rare" (Macphail).

Thurneysser, the son of a Basel goldsmith, frequently got into trouble as a con-artist and swindler. He travelled in Egypt and Asia Minor in the 1560s collecting information on medicinal plants, astrology and other subjects under the patronage of Archduke Ferdinand of Austria, then settled in Berlin under patronage of the Elector of Brandenburg. He intended the present book on umbelliferous plants (carrots and related root vegetables) as the first in a ten-volume series covering all plants, but published only this first volume. Apart from the larger botanical and astrological woodcut illustrations, there are smaller ones showing human skeletons and organs (indicating where the plants supposedly takes its medicinal effect), as well as distilling and other equipment. While the book's "botanical value, as well as its medical value, was absolutely nil" (Anderson), it nevertheless proved influential. It is a typographic tour de force, set mostly in two columns with numerous headings, and notes printed in the fore-edge margins and sometimes in a third column between the text columns.

With two 20th-c. bookplates of the Italian physician and collector Piergiorgio Borio on the front pastedown. Waterstained at the head throughout and sometimes also along the fore-edge, mostly confined to the margins; slight browning, an occasional stain not affecting the colours of the illustrations. Margins of the title-page thumbed, but still generally in good condition. A rare, extensively coloured copy of an extraordinary work, as colourful as the text and the author’s life. 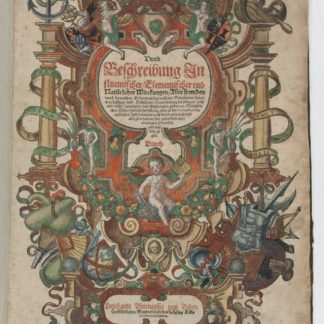