Rare news of Albuquerque's conquests in the East

4to. (8) pp. Modern brown half calf over marbled boards with gilt spine title.

A highly important letter by King Manuel to Pope Leo X, reporting on the great victories of Don Afonso de Albuquerque in India, especially the conquest of Malacca in 1511. Albuquerque (1453-1515) advanced the threefold Portuguese grand scheme of combatting Islam and securing the trade of spices and the establishment of a vast Portuguese Asian empire. He was the first European to enter the Arabian Gulf, led the first voyage by a European fleet into the Red Sea, and was also the first Westerner to reach the coast of South-Eastern Arabia. This very rare Viennese edition (the fourth altogether) was printed in the same year as the original Rome edition. The preface states that the text from which it was set was sent from Rome to Georg Slatkonia, Bishop of Vienna. "Of this edition, copies must have been so rare even as early as the late 16th century, that neither Andreas and Franz Schott nor Pistorius had knowledge of it. Necessarily, this increases the value of the present edition" (Denis, p. 83). 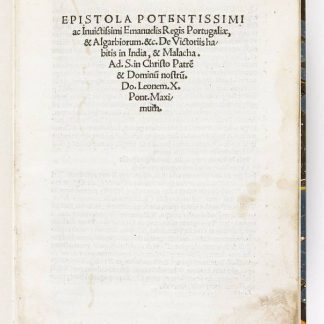