Humphry Davy on how to be elected to the Royal Society

A secretarial letter signed by Sir Humphry Davy ("H. Davy") as President of the Royal Society, to one "Sir", marked "Private & confidential", explaining that, as President, he is unable to interfere in elections, mentioning that Fellows are divided into two classes, "working scientific men" and "Patrons of Science", going on to explain that professional men should offer "some paper or communication which may imply qualification" though "this rule has not been so strictly attended to as it ought to have been".

At this time, a year before Davy gave up the Presidency, the Royal Society was "teetering between remaining a gentleman's club and becoming an academy of science. Davy favoured judicious modernizing [...] He made publication an important factor in election, but, lacking the social status of Banks, he was unable to force his will upon the fellows, and found himself between hostile camps" (David Knight, ODNB).

Two light stains, and some slight damage to edges. 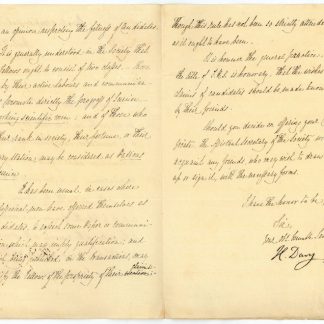