2 vols. 19, (1), 228 pp. (4), 244 pp. With 2 engr. frontispieces. Both vols. bound without series half-titles; pp. 63/4 and 69/70 of Vol. I bound out of order in the middle of the 'Avertissement'. Bound in matching contemporary mottled calf with gilt trim and initial 'J' with a crown on all covers; all edges gilt. Later red stamp "Bibliothèque du Citoyen Napoleon Buonaparte" on both half-titles. Bindings rubbed and chipped, joints shaken and with leather oddly warped due to fire (see below), but both volumes holding firmly in a pleasant, unrestored state.

Rare first edition of this libertine adaptation of an equally colourful Greek author's "letters on love" from the 6th century BC. Calling himself the "French Aristaenetus", Nogaret boasts here that his translation is far superior to that of René le Sage; the Biographie Universelle notes that in addition to the translations, Nogaret adds a number of "letters" of his own to the collection. The present copy has a pleasing provenance, preserved in its original binding of Jérome Buonaparte, youngest brother of Napoleon I; and it may well have survived the great fire of 1871 which destroyed most of the Imperial Library.

Gay calls Nogaret's adaptation a "recueil de folies amoureuses", commenting that "L'Aristenete francais n'est qu'une imitation paraphrasée des Lettres d'Aristenete. Nogaret a eté souvent bien plus libre que l'auteur grec". For his part, Nogaret acknowledges the character of his work: "ce Livre est dangereux sans doute," but immediately defends himself: "Enfin, si je dis d'un côté mon mea culpa, j'annonce d'un autre que j'ai porté la délicatesse jusqu'à respecter [...] même les femmes dont la pudeur s'est refugiée dans les oreilles" (p. 16f.). The subjects of the letters are wonderfully pertinent to the age of libertinism: a man getting into bed with two women; a girl losing her virginity before marriage; a youth in love with his father's mistress; a prison guard cuckolded by a man incarcerated for adultery; a servant girl caught in flagrante with the lover of her mistress; and a young husband filled with passion for his mother-in-law; and so on.

Despite an "Avis" to the reader that future volumes will follow, the "Oeuvres" of Nogaret were abandoned after publishing the present work, which nevertheless claims to form Vols. 1 & 2. The fact that the present set was bound without the Oeuvres' half-titles seems to indicate that its owner was aware that this was a stand-alone publication.

OCLC records no physical copies of this first edition of the "Aristenete Francais" in American libraries - although we have traced one, in the NYPL.

Provenance: Victor Advielle (La Bibliothèque de Napoléon à Sainte-Hélène) gives a good account of the provenance markings found here. The "J" under a floral crown signifies Prince Jerome Buonaparte (1784-1860), youngest brother of Napoleon I - this copy must have belonged to Jerome's personal library, before his marriage at the age of 23 to Catherine of Westphalia in 1807 (after which his books bear the monogram JC). Around 1848, Jerome II (his son) applied the red stamp found on the half-titles here to the books in his father's library, apparently in order to spite his cousin, Louis Napoleon, the future Emperor Napoleon III - by implying that he (Jerome) was the true heir to the throne. Advielle also notes that the books of the Imperial family were housed in the Bibliotheque du Palais Royal during this time, including those of Jerome; the library was targeted during the Paris Commune and burned to the ground on May 23-24, 1871. According to Advielle, some 4,000 volumes survived the fire and even as late as 1890, one could find numerous examples, blackened by fire, for sale in the bins of booksellers along the Parisian quays. We must be careful in asserting that this appealingly romantic provenance applies to the present examples, whose binding are duly blackened, chipped, and warped near the lower edges in a most unnatural way (perhaps implying heat from below).

Incidentally, Prince Jerome was not the only distinguished reader of Nogaret's "Aristenete francais": a copy of this edition is also recorded in the library of Benjamin Franklin, #2444! 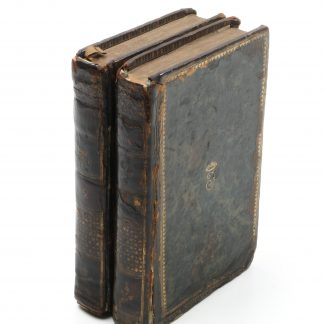