Special commemorative issue of the "Gazzetta Ufficiale di Milano" in honour of the Austrian Imperial couple's visit to Milan during their tour of Northern Italy in the winter of 1856/57. Empress Elisabeth had insisted that their little daughter Sophie, a toddler of not yet two years of age, accompany them. The grand entrance to Milan took place on 15 January 1857. In spite of the luxurious special edition and the flowery ode (by the Gazetta's editor G. B. Menini) which makes up the first page of the text, the reception was cold, even hostile: most of the Italian noblemen failed to appear; in outrageous defiance, they even sent their domestics to occupy the aristocratic boxes during the special performance given at the Scala. The Italian hopes of indepence, dashed in 1849, would once more flourish in the Austro-Sardinian War of 1859, which would leave Austrian influence in Italy severely weakened.

Traces of folds; slight duststaining to margins; some edge flaws. 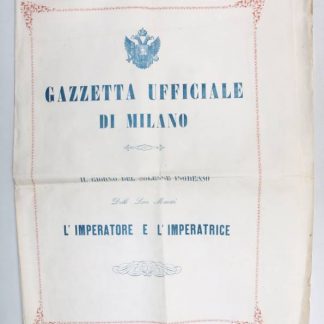