First edition. Inscribed by the author on half title to Therese Henriques (1833-83), in whose home Andersen was a frequent visitor during the last fifteen years of his life. The house was full of life and happy days as a large circle of both Danish and foreign musicians and artists visited the salons and parties held there. The friendship with Henriques was established in August Bournonville's home, where the poet first heard the young, talented Therese Henriques playing the piano. Immediately, a warm friendship between the two was kindled, and it would last a lifetime. 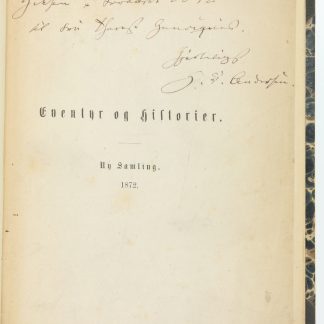