A lost Arabic text on the use of drugs

Latin translation of an Arabic treatise on simple drugs, traditionally attributed to "Pseudo-Serapion" (or Serapion the Younger), but recently identified as the "Kitab al-adwiya almufrada" (Book on Simple Drugs) by Ibn Wafid (d. 1067), a pharmacologist and physician from Toledo. Ibn Al-Wafid was a man of immense knowledge in all medical matters and therapeutics, with the skills to treat grave and insidious diseases and affliction. He preferred dietetic measures; if drugs were needed, he gave precedence to the simplest ones over compound drugs, and among these, he recommended the least complex, to be used only sparingly and in the lowest dosage possible. While the original Arabic version of the book is considered lost, a manuscript written in Hebrew-Arabic as well as partial translations in Latin and Catalan are preserved. This translation was prepared around 1290 by Simon Januensis (Simon of Genoa) and Abraham ben Shem-Tob of Tortosa. Very rare: a single copy in postwar auction records (Sotheby's, 1977: £1500). 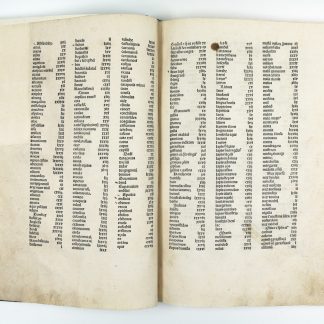