The earliest obtainable printed map of the Arabian Peninsula

Highly important early map of the Arabian Peninsula and adjoining regions, from the extraordinary 1478 Rome edition of Ptolemy's "Geography", created under the direction of Conrad Swenheym (who apprenticed with Gutenberg). The second map of the Peninsula ever published, in its first state, this is the earliest obtainable printed map of Arabia, preceded only by the less detailed and crudely engraved specimen in the Bologna edition of Ptolemy, which is generally regarded as unobtainable.

The present map is an excellent example of Swenheym's finely engraved map of Arabia, based upon Ptolemy. Among the towns shown are Medina (Lathrippa) and the archaeological sites of Zubarah (Catara) and Al-Dur (Domana). The association of Macoraba with Mecca is disputed. Shirley notes that "[t]he new copper plates engraved at Rome for the 1478 edition of Ptolemy's 'Geography' are much superior in clarity and craftsmanship to those of the Bologna edition. There is evidence that work on the Rome edition had been started in 1473 or 1474, and several of the plates may well have been engraved before those printed [by Taddeo Crivelli] at Bologna in 1477. The printing was carried out by two skilled printers of German origin: Conrad Sweynheym and his successor Arnold Buckinck; the publisher was Domitius Calderinus. Many consider the Rome plates to be the finest Ptolemaic plates produced until Gerard Mercator engraved his classical world atlas of 1578" (p. 3).

Until the 1477 edition was definitively dated, the 1478 edition was believed to be the first printed atlas. Buckinck completed the work started by Sweynheym, whose method of using a printing press for the copperplate maps, together with the fine engraving, produced excellent results. Christopher Colombus owned a copy of this edition, which he annotated. The plates for the 1478 Rome Ptolemy were later purchased by Petrus de Turre in 1490, who published the second, unchanged edition of the map; it was again reprinted in 1507. The editions are identical, although there are different watermarks in the paper (though there is some debate as to whether the watermarks are in fact completely reliable in determining the editions).

Some faint stains along the edges of the paper and in the gutter. In very good condition. 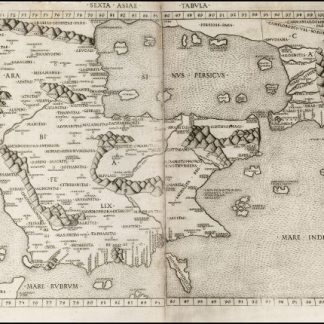