Unrecorded in the standard bibliographies and without counterpart in western libraries: a unique, large-scale view of Alexandria as seen from the north. Formerly the most powerful city of the ancient world after Rome, Alexandria came under Ottoman rule in 1517 and subsequently lost much of its importance to the new port of Rashid (Rosette), 40 miles east, though it would regain some of its former prominence with the construction of the Mahmoudiyah Canal in 1807. In Longhi's engraving, the Ottoman influence may be discerned in the people's clothing as well as in the city's architecture. Within the city are several mosques; the ancient obelisks are shown crowned with crescents. On the river Nile, which flows through the city and underneath the walls, the view depicts numerous trade boats and sailors. Outside the walls lies Pompey's Pillar. The Italian letterpress text pasted under the engraving provides mostly historical and geographical information.

Longhi's panorama seems to draw various aspects from previous works to create its own original representation of the Egyptian city. The perspective is similar to that used in Pierre Belon's 1553 "Observations" and in Braun and Hogenberg's 1575 "Alexandria, Vetustissimum Aegypti Emporium, Amplissima Civitas", published in their famous "Civitates orbis terrarum", but also to that in Mallet's smaller, almost certainly later (1683) view of Alexandria. Apart from the Braun/Hogenberg map, however, the principal model for Longhi's view was likely his own view of "Gran Cairo", apparently published simultaneously: the bird's-eye view and general composition correspond to this similarly rare engraving, which was probably based on a 1549 woodcut panorama created by Matteo Pagano in Venice. 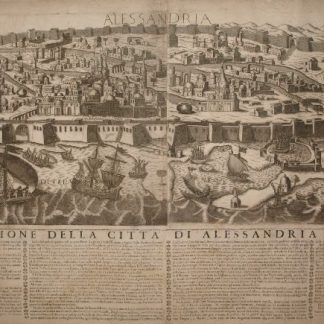