Schindler, Oskar - Emilie Schindler, wife of Oskar Schindler (1908-1974), saviours of 1,200 Jewish lives during the Holocaust. A collection of jewellery and ephemera.

Together with her husband Oskar, Emilie Schindler (née Pelzl) helped to save the lives of at least 1,200 Jews during World War II by employing them in his enamelware and munitions factories, providing them immunity from the Nazis. She was recognized as Righteous Among the Nations by Israel's Yad Vashem in 1994.

Provenance: From the estate of Emilie Schindler and thence by descent. 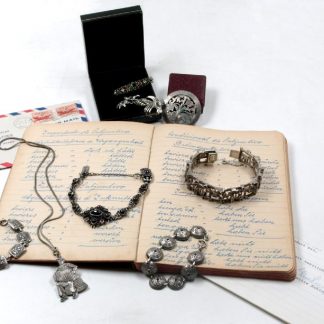