Captivating erotic photo album containing both original photographs and reproductions on the themes of "punishment and penance", which in most cases means flagellation. Sadomasochism, including flagellation, was very popular in the Belle Époque. In France, government restrictions were slightly looser than in other European countries, which led to the country producing almost all photographic pornography in the world as well as having an advanced sex industry. Descriptions note that every quality brothel in Paris contained a "torture chamber" and numerous books on the subject appeared, both scientific such as Marius Boisson's "Flagellomanie" (1912) and pornographic. This specific album was probably compiled by a certain H[ector] Rabier, whose name is inscribed on the spine and was possibly a young Belgian. Nothing is known of Rabier other than that he wrote an introduction for "Trois drames" (Gent, 1932) by the Belgian poet and dramatist Edgar Tant (1889-1963). Rabier also features as a character in one of these plays, alongside a fictional version Tant, in which it is stated that he is identical in age to the fictional Tant. Among the reproductions of prints in this album can be found various images of an erotic nature showing the flagellation of women by men and women and non-erotic images of the torture and punishment of (female) heretics and witches including reproductions of artworks. A few series do not involve women and show various types of corporal punishment in the French colonies of Algeria and Indochina and flogging in the British army. A series of 27 images is without direct punishment and shows life in the Parisian women's prison of Saint Lazare, which also doubled as a hospital for the city's prostitutes. 12 photographs are reproductions of wood engravings and on most of the images the pins which were used to hold the engraving are visible. The images show the cruel murder and torture of nude women by Cossacks. Of the original photographs, two "academic nudes" show a woman from the back kneeling on top of a chair or hanging face down over a chair or cabinet. The 17 other photographs all show a demi-clad woman being bound or tortured by an "oriental" man or monks. A montage of small images suggests that the woman and monk photographs, probably suggesting a witch or heretic being tortured by the inquisition, formed part of a larger collection on this subject. Although these photographs were obviously intended as pornographic images, it is interesting to note that they are hardly more explicit than contemporary history paintings at the Salon, or the images in popular histories, as the content of this album shows. 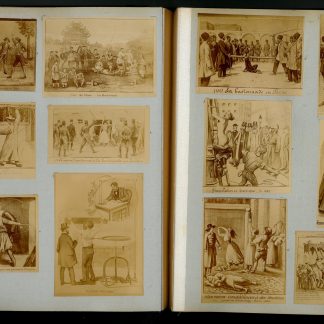