Moulay Ismail Ibn Sharif, ruler of Morocco (1634-1727). Diplomatic letter to the English ambassador Charles Stewart, acknowledging the desire of the English for diplomatic relations, and offering a truce and peace treaty.

Decorated in blue and green ink heightened in gold, this diplomatic letter was sent in December 1720 by the fearsome ruler of Morocco Moulay Ismail Ibn Sharif to Charles Stewart, the English ambassador at the head of a mission sent by King George I to negotiate a peace with Morocco. The small squadron sailed from England on 24 September 1720, commanded by Commodore Stewart, who was authorised with the powers of a minister plenipotentiary to negotiate with Moulay Ismail. A treaty of peace between the two countries was signed on January 1721 at Ceuta, the terms securing the release of 296 British slaves, the free movement of British ships in Moroccan waters, and unhindered access for Moroccan ships wishing to trade with Britain. Before the embassy returned to London a conference was held in May 1721 with Pasha Hamet Ben Ali Ben Abdallah. Stewart was accompanied by John Windus, whose important account of the adventure was published as "A Journey to Mequinez" (London, 1725).

Addressed to "the Christian ambassador of the English" (i. e., Stewart), this letter in Arabic offers greetings from Moulay Ismail, followed by a statement acknowledging the English desire for a truce, close friendship and communication with Morocco, and that the potentate of the English (King George I) has despatched the embassy with this in view. Note is made of previous communications through Pasha Hamet Ben Ali Ben Abdallah and Ibn al Attar and that the content has already been ratified and agreed. He hopes that the agreement will be in accord with the expectations of the ambassador and notes the history of friendly diplomatic relations between the English and the kings of Morocco, citing the relationship between his cousin Ahmad Al Mansour (1549-1603) and Queen Elizabeth I. He continues by advising that if it is the ambassador's wish to renew that covenant and treaty and to encourage the relationship between the two countries then he shall in no way oppose it.

The layout of the letter with subdivided frames is characteristic of Moroccan chancellery letters of this period (cf. J. F. P. Hopkins, Letters from Barbary 1576-1774: Arabic documents in the Public Record Office, OUP 1982). 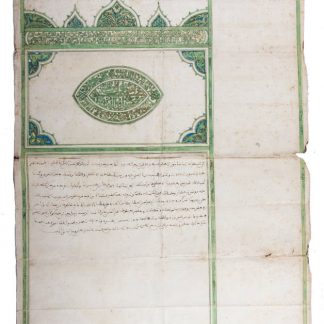