Unique set, coloured by the artist for the Duke

Oblong 1º (475 × 630 mm). 6 lithographed plates of horses, plus 1 additional lithographed view of the stud, all coloured by Pirscher himself with highlights in gum arabic. The first plate of the series with Pirscher's autograph signature and dated "1828".

Unique set of Pirscher's famous series picturing the Duke's horses, coloured by Pirscher himself and obviously prepared for the owner of stud. The first horse depicted is Mirza, a "Silver grey national Arabian with red spots on his left shoulder, presented to the King of England by the Shah of Persia in 1819. As the Persian envoy assured the King, this was the noblest and most excellent Arabian ever to have stood in his master's stables". The other illustrations show mainly descendants of Mirza, who was transferred to the Ducal stables in 1821. The series was later expanded by another instalment to a total of 16 plates, with three of the seven plates redrawn and showing different backgrounds. Thieme/Becker lists the series as complete with 6 plates as present, as does Steinacker (cf. below). Apart from the present copy, neither the first series (as thus) nor the second, expanded edition is known in a coloured version. The use of body colours in this set underlines the fact that Pirscher's lithographs, issued in black and white only, were never intended for colouring, and that this set was eleborately redone and modified (with numerous details - such as the trees and bushes in Mirza's portrait - added by hand) by the artist himself to form a unique dedication copy for his sponsor. Karl Dietrich Pirscher (1791-1857) is one of the pioneers of lithography in Braunschweig. His horse plates are considered his best work and were praised as "probably the most splendid specimens of their kind created in the entire 19th century" (Steinacker). Provenance: 1. The Duke of Braunschweig's collection. 2. I. H. Anderhub library, dispersed by auction in 1963 (in which it constituted the second most expensive item, with an estimate of DM 2600). Slightly browned; some minor fraying to the extremities of the leaves and a few specks, otherwise in very good condition. 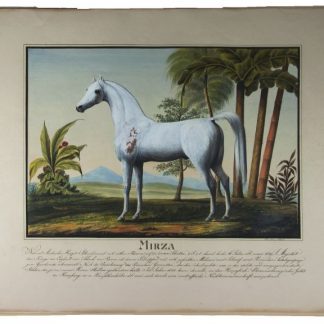