The famous portrait of the Godolphin Arabian

The Godolphin Arabian was foaled in Yemen in approximately 1724. He was one of three great Eastern stallions imported to England between 1689 and 1730. Together with the Byerley Turk and the Darley Arabian they founded enduring bloodlines from which all modern thoroughbreds in the world descend.

Little is known about the origins of the Godolphin Arabian. He was said to have been given to King Louis XV of France by the Bey of Tunis in 1730. Later, Edward Coke acquired him for his stud at Longford Hall, Derbyshire. Upon Coke's death, the ownership of the Arabian passed to his friend, Francis, 2nd Earl of Godolphin, where it acquired the name the Godolphin Arabian. He never raced but spent his life at the Earl's stud farm at Gog-Magog, where he died on Christmas day, 1753. The Godolphin Arabian was a prolific stallion and the present painting is extensively inscribed with details of his progeny, among the most successful of which were Lath, Cades, Regulus, Babraham, Dormouse and Bajazet. Many great modern racehorses, such as Sea Biscuit and Man O'War, have descended from the Godolphin Arabian.

The present composition is thought to derive from an original by David Morier (c. 1705-70), although the whereabouts of this work is unknown. Morier's painting, engraved by John Faber and published in 1753, became a popular print, on which it is likely that George Stubbs based his portrait of the Arabian circa 1793. Three other versions of the present composition, by Quigley, are now in the National Horseracing Museum, Newmarket, in the Paul Mellon Collection at the Yale Centre for British Art, New Haven, and in the collection of His Highness Mohammed bin Rashid Al Maktoum, Ruler of the Emirate of Dubai and Vice President and Prime Minister of the United Arab Emirates.

Exhibited: London, Grosvenor Gallery, Summer Exhibition, 1888 (lent by Harlech, according to a label on the reverse). Removed from the collection of Lord Harlech at the family estate Glyn Cywarch in Gwynedd, Wales. 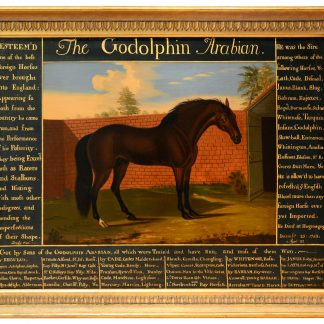