First separate edition of a series of letters by the Russian anarchist thinker Petr A. Kropotkin (1842-1921), first published in the newspaper "Russkie Vedomosti" beginning in 1914. "In numerous statements and in a series of articles published in a Moscow newspaper between 1914 and 1917, he denounced German militarism and expansionism and warned of the dire consequences for Russia of a German victory" (Marshall Shatz, Introduction to Kropotkin: The Conquest of Bread and Other Writings). After receiving news of the February Revolution, Kropotkin made plans to return to Russia, from which he had been exiled for 41 years. According to the preface, the present edition was prepared after his return in March (October 1917). Date of publication erroneously given as "1918" on wrapper. 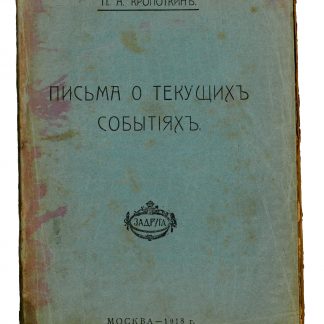