Scarce provincial edition of a pamphlet authored and published between May and July 1917, when the Bolsheviks attempted further to prepare the impoverished peasants for the second step of the Revolution. The speech contained Lenin's theses formulated during the April Congress of the Russian Social-Democratic Labor Party, during which it was decided that complete nationalization of the land was necessary. The pamphlet was printed in large numbers and distributed in rural areas and among front soldiers, and played an important role in convincing Russian peasants of the Bolshevik cause. 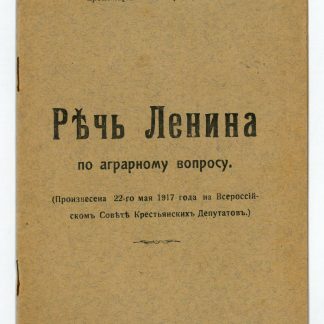