A fair copy, including autograph note to page 3: "In whichever order, try to include as many notes within the time limits, including some in chords if so desired. Start and end with one of the heavy shaded notes".

"Conceived in 1954, 'Thulathia' was composed in 1960 and first performed at the Brookline Public Library in Brookline, Massachusetts. 'Thulathia' means 'a cello unification of three into one', i. e., 'a trio in one'. Grape clusters of the vine connect the energy. The concept is extended to include a cluster of grapes in a united grape vine. Instructions for playing the grapes is explained at the bottom of page 3" (notes provided by the composer).

The Egyptian-born American composer, performer, ethnomusicologist, and educator El-Dabh came to the U.S. in 1950, becoming a part of the New York music scene that included Cage, Varèse, and Hovhaness. He went on to study composition with Krenek, Copland, Dallapiccola, and others. An early pioneer of electronic music, El-Dabh composed one of the earliest known works of tape music, or "musique concrète", in 1944, 'The Expression of Zaar'. He also scored four ballets for Martha Graham: 'Clytemnestra' (1958), 'One More Gaudy Night' (1961), 'A Look at Lightning' (1962), and 'Lucifer' (1975). "El-Dabh is probably the best known composer of Arabic descent and his works are highly regarded in Egypt, where he is considered the foremost living composer among that nation's 'second generation' of contemporary composers" (Wikipedia). 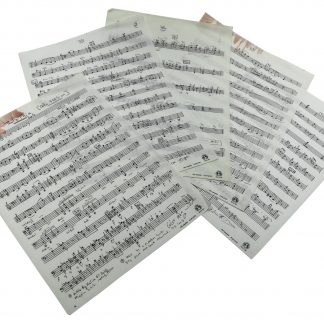