Meeting Middle Eastern rulers on board the flagship

Commemorative publication "written, compiled and produced by [the] officers and men" of the U.S.S. Greenwich Bay after the ship's first tour of duty to the Persian (Arabian) Gulf as flagship for the Commander of the U.S. Navy Middle East Force. In the foreword, Commander K. G. Hensel acknowledges the Gulf as "one of the oldest yet least known parts of the world", a historic region that has "served for thousands of years as pathway of commerce by caravan and by dhow. Today, these areas are strategically among the most important that exist anywhere on the surface of the globe" (p. 3).

The small seaplane tender "Greenwich Bay" departed Norfolk on 30 April 1949 for a six-month mission, four months of which were spent in the Gulf area based at Bahrein, calling at Kuwait, Ras al Misha'ab, Ras Tanura, Sharjah, and Muscat before returning to Norfolk on 1 November. Every year thereafter the ship would repeat this duty, sailing through the Mediterranean to operate as flagship in the Red Sea, Gulf, and Indian Ocean for 4 to 6 months. In total, the "Greenwich Bay" made 15 Mediterranean deployments. This fully illustrated record contains rare images of a fire at Aramco's Ras Tanura oilfield that scorched the ship's hull, scenes from Manama, Bahrein, the "distinguished guests" who visited aboard (dignitaries of the Gulf countries visited, including a portrait of HRH Faisal al Saud on board the "Greenwich Bay"), etc. In addition to operating with foreign naval units in the Mediterranean, Red Sea, Gulf, and Indian Ocean, the "Greenwich Bay" performed extensive work in the People-to-People programme, particularly in carrying drugs and other medical supplies to Arab and African nations, and operated as an important tool of diplomacy in the region.

Light brownstaining to endpapers, otherwise a fine copy of a rare, privately printed work whose press-run likely did not exceed the number of the crew: 20 officers and 206 men. Inserted are a 3-page assessment form "Military requirements for all men in the Navy" and a Bombay port receipt from the ship's call at Bombay in July 1949. 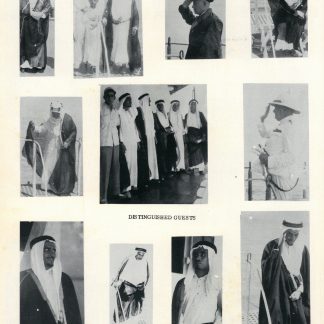