4to (17 x 25 cm). Manuscript on paper: red, black and brown ink, in an elegant Maghribi script. 184 leaves (with a diagrammatic drawing of the Kaaba on leaf 124), lacking in the final gathering. 19th century red leather Islamic binding with flap, gilt, preserved in a clamshell solander box.

Abu Hafs Zayn al-Din Umar ibn al-Muzaffar Ibn al-Wardi 691-749 H (1291/92-1348/49 CE), known as Ibn al-Wardi, was an Arab historian and geographer. This masterpiece is one of the most renowned treatises on geography in the Arab world of the 13th and 14th centuries. It is a large, rambling Heredotean narration, mixing all kinds of information on places, peoples and traditions known to the Muslim world at the time. The description of the known world centres on Medina and Mecca, unfolding with interesting details, distances, comparisons between cities, tribes or geopolitical situations, flora, fauna and legends. He also talks about Slavs and their lifestyle and mentions al-Mahdiyya as the residence of the Fatimid dynasty. In the earliest pages of the work he mentions the mythical Mount Qaf, always eager to attract the readers attention with strange and bizarre tales. His audience for the work was the cultivated, cosmopolitan and urban Arab elite.

In fair condition, with some marginal fraying and signs of use. 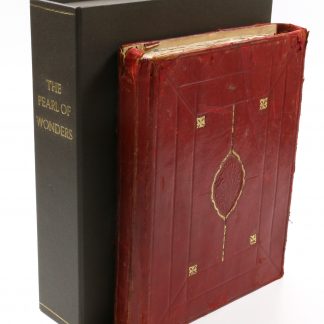