A delightful musical autograph in C major (with a brief D minor development) written a year after the composer settled in his Paris apartment on rue de la Chaussée-d'Antin. The dedicatee, 'M. Mendes', may possibly be Mario do Céu da Silva Mendes, daughter of the eminent Portugese writer Joao da Silva Mendes. She would have been nine at the time, but was an able pianist even then and later became a notable performer and teacher; the image of the famous composer jotting down a musical flourish for a young admirer is a difficult one to resist. 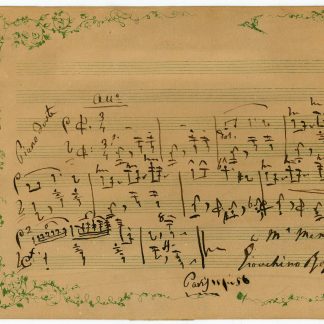