Top left notes to the letters (A-D) in English and Dutch.

After the Vereenigde Oostindische Compagnie was driven out of Taiwan in 1662, it tried to gain access to the porcelain and silk trade at the port of Fuzhou, then also known as Hocksiew, though the Company's attempts to trade there were hampered by a string of bureaucratic restrictions. As early as 1655 a Dutch delegation had visited the Imperial court in Beijing, but had had little opportunity to discuss trading conditions. A visit of this kind was regarded solely as a token of the respect to which the emperor was entitled. In 1666 a second delegation was sent to Beijing, led by the ambassador Pieter van Hoorn. But aside from some dazzling descriptions of China, this journey yielded nothing. Although the trading post at Fuzhou barely made a profit, the VOC kept it on until 1681. 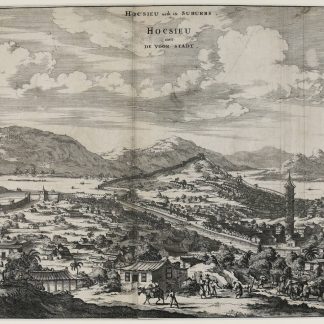