First edition, signed and dated on the flyleaf by Ai-ling Soon in the year of publication: "E-Ling Soon '09, Wesleyan College". Ai-ling Soong was the eldest of the three Soong sisters, the most famous women in China in the first half of the 20th century. Their father, himself educated at Vanderbilt and Duke, sent all three of his daughters to Wesleyan College, the liberal arts women's college in Macon, Georgia. Upon graduation in 1909, Ai-ling returned to China and became secretary to Sun Yat-sen, a close friend of their father's. When she left that position, her younger sister Ching-ling Soong took the job, eventually marrying Sun Yat-sen, who was to become the first president and founding father of the Republic of China. While Mei-ling, the youngest sister, married Chiang Kai-shek, commander of the Chinese armies and later himself President, Ai-ling was to marry H. H. Kung, the Finance Minister and the wealthiest man in China. The sisters were the subject of a widely-read 1941 book, as well as of a 1997 film.

The community cookbook, containing "five hundred good old Southern recipes", soon became so identified with the region as to be named "Macon's Official Souvenir" by the Macon City Council in 1912. Among the recipes - many attributed - are Okra Soup, Oyster Loaf, Belted Smelts, Spoon Pone, Corn Dodger, Rice Waffles, and Chicken Gumbo; there are also instruictions on how servants ought to present and remove dishes.

Slight edge toning to text block; insignificant rubbing to binding. This copy lacks the cancel leaf 270a which was inserted into the index after printing in order to include the "Desserts" section, which had been inadvertently dropped by the printer: likely, the present copy was distributed before the error was caught. 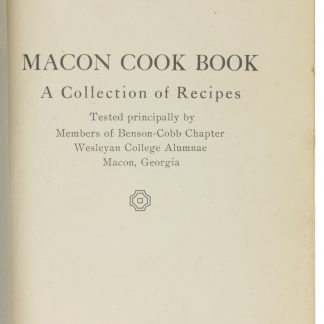