First edition of a unique classic

First edition. Doughty's journey, undertaken between 1875 and 1878, "did much to advance knowledge of north-western and central Arabia" (cf. Henze). He was the first European to see the city of Mada'in Salih, near the northern border of Hijaz, crossed the expanse of Arabia to Jeddah, and returned via Bombay. Doughty's "unique style of English, which [he] vehemently refused to have edited", led to four commercial presses turning down his manuscript before the Cambridge University Press agreed to publish it in 1888. "The result was one of the great classics of travel literature which, although exceptionally demanding for the reader, passed through numerous reprintings" (Howgego III, p. 246). The geological and geographical descriptions are of such accuracy and detail that it became a military textbook for the British Army in the final phases of the Arab revolt. The sensitive observation of Bedouin life is unsurpassed, whether describing how scarlet dye is made from toadstools and camels' urine or the construction of tent ropes. T. E. Lawrence describes Doughty as coming away with "the soul of the desert".

Some occasional edge chipping and paper flaws. Removed from the Metropolitan Borough of Holborn Public Library (Reference Library) with their bindings, bookplates, shelfmarks, and stamps. 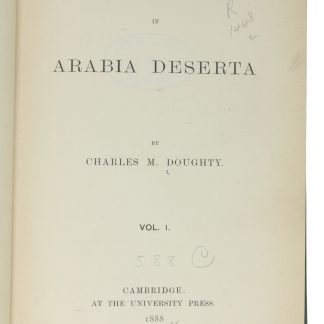