Rare, complete set with the usually lacking fifth volume. A vast collection of documents on 19th century French railways by the brothers Émile (1800-75) and Isaac Pereire (1806-80), prominent French entrepreneurs inspired by Saint-Simonian ideas. Their "complete works" were planned to run to 28 volumes, of which twelve would be dedicated to the development of French railways. Only four of these volumes actually appeared: the fifth volume here present was never brought into the trade; while some copies of the text were printed, folded and stitched, they were never equipped with preliminaries or wrappers. This final volume includes documents for the years 1851 and 1852.

The Péreire brothers were prominent Parisian financiers of Sephardi descent, rivals of the Rothschilds. As early as 1835 they founded, with Rothschild, the "Compagnie du Chemin de fer de Paris à Saint-Germain". Later they founded the Crédit Mobilier bank which specialized in mining exploration and funded the booming railway construction of the mid-19th century.

Sewing of Volume 1 somewhat loosened; wrappers chipped. Mostly uncut and untrimmed as issued. From the library of David Saul Landes (1924-2013), professor of economics and of history at Harvard University, with his ink ownership to the upper wrapper cover of the first volume. 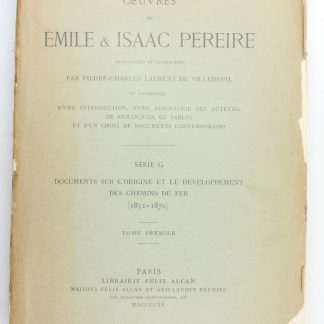