The author's major book on economics. Lueder served as professor of history and politics at the Brunswick Carolinum; he was among the first to teach Smithian economics in Germany and hence played an important role in the transition of German economics from mercantilism to liberalism. While the present work is largely a paraphrase of Smith's "Wealth of Nations", it has been observed that Lueder deserves a place in the history of economic literature on his own account for his numerous corrections of and additions to Smith's work, particularly where geographical, ethnographical, agricultural and statistical issues are discussed, and for his emphasis on the influence of moral and intellectual factors on industrial development.

Two old (ca 1920s) library stamps on titles erased, slightly affecting paper but without loss of text, showing that the three books have formed a set for almost a century. 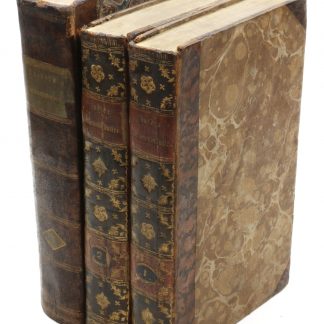