Jevons, W[illiam] Stanley. Methods of Social Reform and other papers.

First edition. A collection of essays previously published in the "Contemporary Review" under this title, and several essays on similar subjects, posthumously published by the author's widow Harriet. Jevons had planned to republish these essays himself, and with that object had made some revisions, but his death in 1882 prevented him from completing the work. The essays treat subjects such as "the amusements of the people", the rationale of free public libraries, the use and abuse of museums, "cram" ("the destruction of true study"), trades societies, industrial partnerships, married women in factories, cruelty to animals, the United Kingdom alliance and its prospects of success, experimental legislation and the drink traffic, postal services, telegraphs and railways.

The slightest wear at top of spine. Small circular stamp of G. Pekelharing, Rotterdam, in corner of title-page. A fine copy. 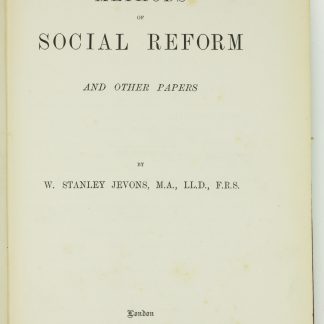