Albuquerque's expedition to the Arabian Gulf

Second edition of the first three "Decades" on Portugal's Middle Eastern enterprises, all that was published during the lifetime of the author (a fourth volume was produced posthumously in 1615, and the set was continued by other hands). "This is considered by Du Fresnoy as being a good edition of the three first decades" (Clarke, The Progress of Maritime Discovery, p. 132). The writer de Barros (1496-1570), head agent for the Portuguese overseas trade authority "Casa da Índia", managed to persuade King João III to commission from him a history of the Portuguese in India (including Asia and southeast Africa). The result, published between 1552 and 1563, earned him renown as one of the first great Portuguese historians, and the the title of a "Portuguese Livy". The 'Decades' contain "the early history of the Portuguese in India and Asia and reveal careful study of Eastern historians and geographers, as well as of the records of his own country. They are distinguished by clearness of exposition and orderly arrangement. They are also lively accounts" (Enc. Britannica). Books 2 and 3 of the "Decada Segunda" (fols. 21 ff.) offer a detailed narrative of Afonso de Albuquerque's expedition to the Arabian Gulf and his conquest of Ormuz in 1507; the island remained under Portuese occupation from 1515 to 1622. As vassals of the Portuguese state, the Kingdom of Ormuz jointly participated in the 1521 invasion of Bahrain that ended Jabrid rule of the Arabian archipelago.

From the library of the Spanish Dukes of Medinaceli y Santisteban (their engraved armorial bookplate on the pastedowns); olf shelfmark on flyleaves. Occasional slight browning, but a very good set. 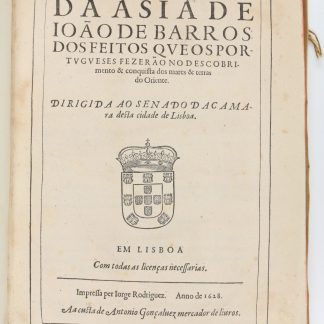