Second edition of a handbook that was essential for English speaking persons who wished to obtain competence in Mandarin with the required knowledge of vocabulary and functional grammar and an awareness of the main types of verbal interaction.

The author Joseph Edkins was a prominent English Sinologue who lived in China for 57 years and published fourteen books on the language and culture of the country, amongst others a catalogue of the Chinese collection of the Bodleian Library (1876). His first publication was a Grammar of the Shanghai dialect (1853), making this Mandarin Grammar his second dictionary. It was his only book that had a second edition. He was forward thinking with the idea that the European and Asian languages have common roots, and thus shared ancestors.

With the bookplate of John Lawson on paste-down. In good condition. 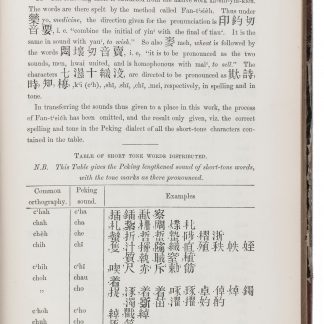