On the expediency of British rule in the East Indies

Grant, Robert. The Expediency maintained of continuing the System by which the Trade and Governement of India are now regulated.

London, printed for Black, Parry and J. Hatchard (back of title-page: printed by Cox and Baylis), 1813.

First and only edition of a history of the relation between Great Britain and their possessions in the East Indies, written by the British lawyer and politician Robert Grant (1779-1838), son of Charles Grant, chairman of the board of directors of the British East India Company. "The projected work was intended to exhibit, first, a historical sketch, derived from authentic sources, of the past proceedings of the East-India Company: in the next place, a correct view of the actual nature and effects of their present system, both political and commercial ... and lastly, an investigation of the objections adduced or adducible against the present system..." (p. II). The main text consists of four extensive chapters, followed by 15 appendices, mostly tables listing officers, troops and commercial details. The work is mostly written in defence on the East India Company's conduct, believing in "the Company's ability to improve conditions in India" (Tuck). 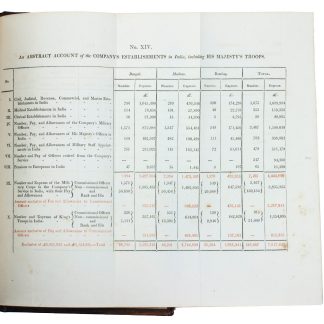 Sie sehen: Grant, Robert. The Expediency maintained of continuing the System by which the Trade and …London, 1813. € 4.500,00
In den Warenkorb