First, very rare and unexpurged edition of the proceedings of the important Third Congress of the Russian Social-Democratic Workers' Party, held in London. "Believing that an insurrection was imminent, Lenin set out to wrest control of the Party from the Mensheviks. In April he summoned his followers for what he designated the Third Congress of the All-Russian Social Democratic Party. Convening in London from 25 April to 10 May 1905, this Congress was attended only by Bolsheviks, including Litvinov, Kamenev, Rykov, Krassin and Lunacharsky. "Lenin had little difficulty getting his programme adopted in London. The Bolshevik delegates accepted him as their leader, and gave him carte blanche. The immediate task was to organize an armed uprising, the Congress declared. The Mensheviks were virtually excommunicated, a fact which had no practical significance, inasmuch as they did not recognize the authority of the Third Congress. As far as they were concerned, the London gathering was the first Congress of the Bolshevik party" (David Shub, Lenin, p. 100).

Because this work contains two lengthy discourses by Lenin, the volume is considered a Lenin first edition. Lenin represented the city of Odessa, a city he had never visited. Lev Kamenev and Alexei Rykov made their political débuts at this congress. 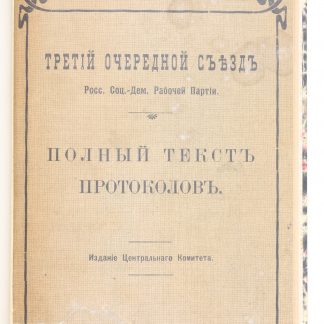