Mediaeval Refutation of the Qur'an, From the Library of Sultan Mehmed V

Rare edition of this famous and scare refutation of the Qur'an. The Dominican Ricoldus (ca. 1243-1320) was sent to the orient as a missionary in 1288. He visited the Holy Land and travelled to Baghdad via Cilicia, Erzurum, and Tabriz. During his stay in Baghdad, Ricoldus studied the Qur'an and other works of Islamic theology, for controversial purposes, arguing with Nestorian Christians. He is said even to have begun a translation of the Qur'an about 1290, but it is not known whether this work was completed.

Ricoldus returned to his native Florence around the year 1300 to compose or edit several works about the Middle East. While many of his writings praise the Muslims' social behaviour, hospitality and sense of honour, his best-known work, the "Contra legem Sarracenorum", is a notorious refutation of the Islamic doctrines. Largely a compilation from William of Tripolis, Marcus of Toledo and the "Contrarietas alpholica", and probably an early effort written in preparation of Ricoldus's mission, it contends that the Qur'an's self-contradictory passages, confused arrangement and want of miracles prove that Islam cannot be a true revealed religion. Despite Ricoldo's hostility towards Islam his work shows specific knowledge of the Qur'an and overcomes one important prejudicial error common to other medieval criticisms of Islam: the perception that Muhammad introduced a christological heresy. The work was widely received; a Greek translation was prepared as early as 1385 by Demetrius Kydones, which was re-translated into Latin by Bartolomeo Piceno as "Improbatio" or "Confutatio Alcorani". A Spanish version appeared at Toledo in 1502, and Luther translated parts into German in 1530 (his "Verlegung des Alcoran" appeared in 1542). It influenced Pope Pius II, John of Segovia and Nicolaus Cusanus (cf. LMA VII, 808).

Binding worn but professionally repaired; spine rebacked. Some fingerstaining and browning with occasional slight worming to gutter. Trimmed rather closely with printed marginalia cropped in places, title fragment torn out and mounted, preserving some old handwritten annotations. Provenance: Mehmed V (1844-1918), Sultan of the Ottoman Empire from 1909, with his his Arabic bookplate on the pastedown. 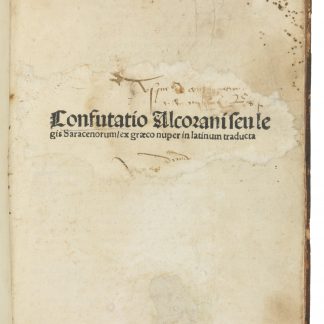