Revolutionary broadside reproducing the text of a foundational document of the Third Communist International, which was presented and confirmed at the constitutional first Congress of the Comintern on 2-6 March 1919. Later known as the "Manifesto of the Communist International", the document calls upon the proletarians of the world to rally around Lenin's principles for the revolutionary struggle against the bourgeois regimes and was signed by all delegates of the Congress. The text of the manifesto was written by Leo Trotsky, who personally presented and declaimed the text at the meeting of the Congress. It was printed in "Pravda" following the Congress, and evidently broadsides such as these were sent to local cells of the Bolshevik Party and to various provincial Soviets to bolster support for Bolshevik policies.

With an article by Lenin printed in the third column verso, a short speech on the occasion of the Congress entitled "Zavoevannoe i zapisannoe" ("Conquered and recorded") by Lenin (mistakenly signed "P. Lepin" by the printer).

Old creases; some fraying to upper edge and one tiny hole at fold, with no loss to text; otherwise very good, printed on sturdy white paper. A scarce survival which we are unable to trace in either Russian or Western institutions. 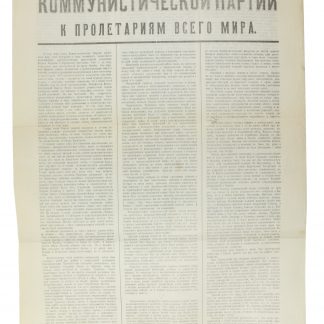