First edition thus. As the title reveals, the book is based on the famous handbook for merchants published by Jacques Le Moine de l'Espine (d. 1696), a French protestant refugee who established himself in Amsterdam around 1679 as a merchant and print dealer. His book became the most widely used work of its kind in Amsterdam during the 18th century. The first edition appeared in 1694, and a great number of ever-expanding editions followed, edited by Isaac le Long after the death of the original author and from 1727 onwards augmented by a second volume. The final edition, which ran to four volumes, appeared in 1801/02. Simultaneously with the first Dutch edition, Le Moine published a French edition, a volume of a mere 206 pages. A second French edition of 388 pages was published in 1710: while the name of Le Moine de l'Espine appeared on the title, it was edited by an anonymous author with the help of Jacques Mondoteguy. The present volume only states that it is "based upon the work of Le Moine". Indeed, it is a much revised and largely expanded edition and more systematically arranged. Ricard established himself in Amsterdam as a merchant in 1705, and though little is known about his life, his work demonstrates that he was experienced in various branches of commerce. The engraving, which appears to be lacking from all other copies, shows the Amsterdam City Hall, indicating "No 1 - place where the bank is situated" and "No 2 - place where the money of the bank is traded from 10 to 12 o'clock in the morning". 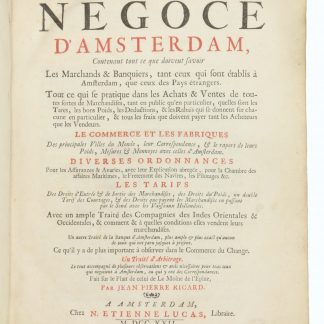