500 x 420 mm. Oval manuscript map in ink and watercolour (blue, brown, green and red; map image including water 295 x 380 mm, the land alone 220 x 305 mm) on a half sheet of extremely large Dutch laid paper (watermark: D&C Blauw IV), with dozens of features labelled in Persian (written in black ink in the nastaliq script) and with animals (including elephants and a dragon), people and 4 European ships. Framed and matted.

An 18th century manuscript copy, in colour, of a lost map in the Islamic tradition, with dozens of inscriptions in Persian and extensive pictorial imagery showing numerous mosques, elephants in southern Africa, eastern India and what may be northern Bengal or part of Southeast Asia, snakes and a dragon (with four feet and two pair of wings) in East Asia, birds north of the Caucasus and people in Europe north of the Alps. The regions with people and animals (excluding the dragon and snakes) are also the only regions shown wooded. The oval land is surrounded by oceans with a European ship at each of the four cardinal compass directions: three 3-masted ships flying flags with St George's cross (used by the crusaders, Knights Templar and English and French troops from the 12th century and by the Genoese and others from the 13th century: while it is not St George come to slay the dragon, these European ships in an Islamic map remain a puzzle), and at the south a 2-masted ship with no rectangular flag, all four ships accompanied by rowboats. Inlets can be identified as the Arabian Gulf, the Gulf of Oman, the Red Sea, the Mediterranean, the Black Sea (?) and another in the Far East. A wide straight band of mountains runs west to east from coast to coast, apparently representing the Alps, the Caucasus and the Himalayas, with a few additional mountains in southern India and elsewhere. One can clearly see the Tigris and Euphrates rivers as well as the rivers of the Indus and Ganges valleys. After one passes beyond Bengal it becomes more difficult to identify the topographic features that ought to represent Southeast and East Asia: there is no island to represent Japan, and the peninsula that faintly resembles Korea seems more likely to be China. While some pictorial elements and lettering are designed to be viewed from various sides as one turns the map, there is a distinct bias in the lettering and some of the pictures for west at the head, which is quite unusual (most Islamic maps have south at the head).

We have found no record of any closely similar map, but the topography certainly owes something to the traditional Islamic world maps, perhaps by the 10th-century Abu al-Hasan al-Harrani or his followers such as the 15th-century Ibn al-Wardi. Like most maps in the Islamic tradition (including those of al-Bakri and al-Istakhri), these follow the Greek tradition of Anaximander (6th century BC) in depicting the world as an almost perfectly geometric circle surrounded by the great river or sea Oceanus, and also representing other features with abstract forms. They show the Nile running into the Mediterranean and (almost as its continuation north of the Mediterranean) a channel leading to the Black Sea, which continues via the river Phasis to the northern coast, forming a boundary between Europe and Asia. The present map is much more naturalistic, with an oval form and irregular coastlines. The inlets and rivers also have more naturalistic forms, and the map shows much more detail than do the traditional Greek and Islamic maps (one can recognize Qatar and Ceylon/Sri Lanka, and one of the two islands in the Mediterranean probably represents Crete (is the other Ceylon, Sicily, an oversized Malta, or something else?). Yet in spite of its greater detail and naturalism, its geography is in some ways less accurate than that of its more abstract ancestors. Like the al-Harrani and al-Wardi maps, the Nile has an L shape (though not rigidly geometric like theirs), but the southern end connects to the Red Sea and the northern end passes east of the Mediterranean, continuing directly into the channel leading to the northern coast (with no graphic distinction between the Black Sea and the channel to Oceanus). The Nile also appears to contain an enormous island, but the tower at its northern end might possibly represent the 13th-century minaret at Luxor. The Mediterranean appears as a triangular inlet without even a bulge to suggest Greece or Italy, which many Islamic and Greek maps show clearly. Africa and India extend no farther south than the Arabian Peninsula, with only the Red Sea and the Gulfs separating them. Some Mughal maps, such as that of Sadiq Isfahani (ca. 1647), share the more naturalistic depiction, and Isfahani also depicts Ceylon similarly, but his map shows few geographic or topographic similarities.

Perhaps the most remarkable feature of the present map is the depiction of mosques and minarets, which are so detailed that many can be identified even without recourse to the Persian inscriptions. The rectangular wall of the Great Mosque at Mecca appears clearly with the Ka'bah in the centre and four minarets, one at each corner. This also suggests a latest possible date for the lost original, for three more minarets were added in quick succession, apparently between 1603 and 1629. A recent study suggests that the Ka'bah began to appear in Islamic maps only ca. 1450 (Karen Pinto, "Medieval Islamic maps", 2016, not seen, but cf. Arnoud Vrolijk in Mols & Buitelaar, eds., "Hajj: global interactions through pilgrimage", 2015, p. 216), suggesting that the lost model for the present map with many mosques, some shown in detail, was at least several decades later. This evidence for a date, combined with the naturalistic depiction, suggests the lost model for the present map might have originated in the Islamic realms of 16th-century India. The Great Mosque at Medina is also clearly depicted. Pending more information about the Persian inscriptions (which apparently name regions, cities, mosques, topographic features and curiosities), we can only guess at the other mosques or minarets. We noted one perhaps at Luxor. Two on the eastern side of the Euphrates might be at Basra and Aleppo (with some pyramids in between), while one in North Africa looks like the Great Mosque at Taza and the other might be at Fez. There may some buildings in East Asia, by the mountains near the dragon, but they may merely be smoke or flames from what appear to be burning rocks. A couple of other sites show fortress-like walls (in red in the northern parts of the Arabian Peninsula and India) without a mosque or minaret.

The map is stunning as a work of art, a fusion of age-old tradition with modern techniques of illustration and figural representation, executed in pastel colours with the mountains and ships in several shades of brown, Oceanus and the inlets light blue, the rivers grey, the forests and dragon green and occasional small details in red or pink. In spite of its large size, the map is drawn on a half sheet, so that the whole sheet would measure at least 84 x 50 cm, considerably larger than Imperial and one of the largest sheet sizes produced in the 18th century. The chainlines are about 28.5 mm apart. The watermark or countermark would fall in the middle of the map image, so that it is not identifiable in the framed map. One can make out only some diagonal lines that might belong to a letter W. The map is numbered "No 95" in an 18th-century hand at the upper left, so it may have once been part of a manuscript atlas.

Formerly folded once horizontally and vertically. In very good condition. An 18th century copy of a lost 16th century (?) Islamic map of the world, showing seven mosques or minarets, unlike any other map known to us. 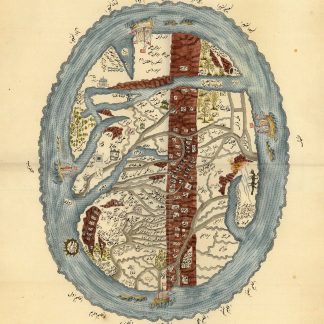