A history of the kings of Persia and Hormuz: one of the earliest Western books to mention Qatar

First edition of a "history of the kings of Persia compiled from the Persian histories of Mir Khwand and Turan Shah" (Howgego), in the original Spanish, by the Portuguese merchant and adventurer Pedro Teixeira (1563-1645?). It is one of the earliest European sources to mention Qatar, relating to the pearl fishery in the region: "The pearl fishery at Bahren begins some years in June, but generally in July, an lasts all that month and August … They generally go a fishing to Katar, a port on the coast of Arabia, 10 leagues to the southward of the Island Bahren. As soon an oyster is brought up, they open it, and take out the pearl. The pearls of this sea surpass all others in goodness and weight…" (English translation). The work is divided into three parts. The first, which is the largest, deals with the kings of Persia. It is a summarized translation of the voluminous Rawzat al-Safa by the Persian historian Mir Khwand (ca. 1434-1498), and is probably the first translation of the text into an European language. The second part is a translation of the Ayyibud emir Turan Shah's (d. 1180) chronicle of the kings of Hormuz, a text which is today only extant in translations. Though Teixeira's adventures started in 1586, he reached Hormuz in 1593, where he resided for several years to study its history. Both parts contain a chronological account of the kings, but also provide a more general history of the area. The last and third part contains an account of Teixeira's later travels from India to Italy in 1600-01 and 1604-05, visiting China, Mexico and the Middle East. In his preface Teixeira states that he originally wrote the work in Portuguese, but that it was translated into Spanish to appeal to a wider audience. The work appeared in a French translation in 1681, and extracts appeared in an English translation appeared in 1711, followed by a translation of the full text in 1715.

Binding slightly rubbed and with a small defect to upper spine. Slightly browned, otherwise immaculate copy in its first binding. 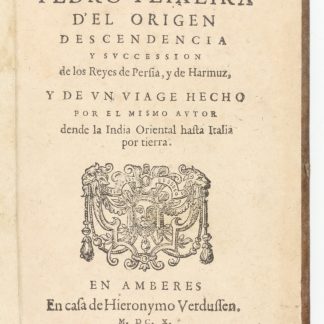