The photo album of an Aramco pioneer

[Saudi Arabia]. - Aramco. Original photographs from the estate of Lester M. Snyder (1905-2000), vice president and member of the board of Aramco.

Unique photo album from the estate of Aramco pioneer Les Synder, memorializing his more than three decades with Aramco and Socal upon his retirement in 1963. The photographs focus on his final decade in Dhahran, including images of HRH King Abdulaziz and HRH King Saud, desert scenes, Badawin life, falconry, but also life at the Aramco compound at Dhahran, impressive aerial shots as well as details of the oil wells and the city, the Ras Tanura oil terminal, and even a few images of Mekka and the Kaaba. Four pages of signatures by Aramco team members bear witness to the high regard in which Snyder was held by his colleagues and employees, as do the included letters, telegrams and miscellaneous items regarding his farewell. A special "Sun and Flare" edition (June 1963), also included, honours Snyder and his wife Betty for their lifelong service and dedication to Aramco.

During his nearly three decades in Saudi Arabia, Snyder played a key role in the development of the kingdom's vast oil reserves. He joined Standard Oil of California as early as 1931 and transferred to the California Arabian Standard Oil Company (Casoc, later Aramco) in 1939, arriving in Dhahran in April, only a year after the discovery of what soon would be recognized as the largest source of crude oil in the world. He was present on May 1st when the tanker "D. G. Scofield" took on the first shipment of Saudi Arab oil ever to be loaded at Ras Tanura, an event also attended by HRH King Adulaziz. Snyder returned to San Francisco in 1943 to work on plans for the Ras Tanura refinery, but was back in Dhahran in 1952 when the site was made Aramco's executive headquarters, soon rising to the position of vice president and general manager for Operations.

A fine collection of photographs in excellent tonal quality throughout, wonderfully preserved in a somewhat worn album. 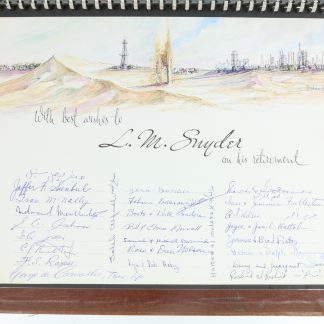