Intriguing, very attractively written and illustrated manuscript. Likely composed by a Portuguese military officer for the purpose of military instruction, this early 18th century manual was written at a time of transition from the Spanish "tercio" infantry organization that had dominated early modern European warfare for centuries to the modern linear formation that would shape the battlefields of the Age of Reason. The preliminary matter (of which only a single page remains) consists of a sequence of algebraic squares from 406 to 450 that reveals the infantry's ongoing fascination with the carré organization. The substance of the book is taken up by 123 chapters on forming, deploying and moving the "gente armada" in military units, often in square-shaped "escuadras", other times in a series of "filleiras" (ranks and files). Variously, the army's weaponry (arquebuses and pikes) is discussed. The longest chapter, "capitollo 50", spans some 65 pages and includes a wealth of diagrammatic battle formations (a total of 75, often in two parts), indicating the infantry's vanguard and rearguard ("bemguarda" and "rettaguarda") as well as their marching and field positions ("marcha" and "a seus postos"). This section is followed by a series of chapters on navigation and naval warfare. Other parts discuss the deployment of ammunition (with a sketch showing cannonballs of various materials and weight).

Rebound in the 20th century; occasional ink corrosion to rules; several repairs and careful remarginings. In spite of the gaps in the page numbering, the manuscript appears substantially complete save for most of the preliminary matter and chapters 6-12 of the text; at the end a final leaf of the index is missing. An appealing survival, showing the practices of one of Europe's oldest and once most redoubtable ground and naval forces at a time of momentous organizational change. 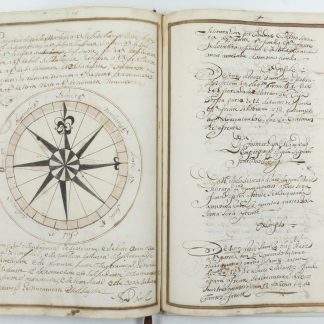