First edition of this early, finely produced classic, a survey of the Ottoman Empire and its military administration, finance, and commerce. "His important work on the military system of the Ottoman Empire concerns itself with its finances, revenues, commerce, etc. Marsigli gives an account of the different military functions as well as a description of the different types of artillery, mines, fireworks, etc." (Blackmer). The work concludes with an invitation to the Christian princes of Europe to reunite against an enemy who would not be able to resist the combined disciplined forces at their command.

Marsigli (1658-1730) had accompanied Ciurani, the Venetian bailo, to Constantinople in 1679, was captured during the Turkish-Hungarian campaigns of 1682-99 and was appointed by Emperor Leopold in 1699 to demarcate the frontiers between Turkey, the Venetian republic, and Hungary. The plates show plans of sieges, battle formations, organisation of camps, costumes, horses, weaponry and ordnance, equipment, ensigns, etc. This copy never was bound with the Italian title to the first part; the preliminaries are complete thus, numbered IX-XVI. 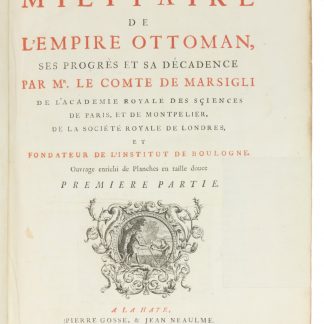