A manual on horses, illustrated with 21 large miniatures

A strikingly illustrated 19th c. manuscript excerpt of the "Shalihotra," a classic of Ayurvedic hippiatry attributed to the legendary founder of Indian veterinary science. Horses were a vital part of Indian culture, and a tradition of hippiatry developed in parallel to human medicine: the sage Shalihotra was said to have been educated alongside Agnivesha - one of the earliest authors on Ayurvedic medicine. Shalihotra's treatise on the care and breeding of horses was translated into many languages and edited into many recensions. This manuscript contains 21 detailed illustrations of horses in various states of distress, with one - depicting a horse being led by a male figure - heightened in gold. It is written in at least four hands and may represent a "core" recension of the text with additional medical knowledge added over time. Several later manuscript annotations in blue ink and pencil record herbal recipes for analgesics and other cures, while the upper corner of one leaf bears a talismanic square made up of an Arabic prayer.

From the library of Jay Snider, with his bookplate loosely inserted. 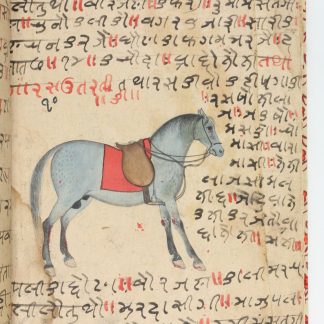