Second edition of the famous Melantrich Bible, published five times between 1549 and 1577. The present edition features for the first time the Bohemian version of a comparison of the Evangelists (translated from German by Jan Stránenský), surrounded by woodcut borders. It also contains the third Maccabees and the voyages of St. Paul, both translated by Sixt d'Ottersdorf, and originally published in the first edition. Richly illustrated throughout with. The small world map shows the three continents, Europe, Asia and Africa.

With contemporary ownership and a Czech note in a different hand to flyleaf. Second printer's device has added handwritten motto "Super omnes gentes" and additional ownership. Folios 203 and 343 are used twice; later, the foliation omits 404. The woodcut depicting the Fall of Man censored with sanguine pencil. Severe paper flaws to the margins near beginning and end of the volume with substantial text loss, partly remargined with paper 18th century paper. The title-page, the table of contents, and 3 full-page woodcut borders are retouched in ink by a contemporary hand. Several pages show small inkstains; a larger stain on ff. 442-450. Margins fingerstained and partly waterstained. Some underlinings, notes and cancellations in pencil and pen by contemporary and modern hands. From the library of the Viennese collector Werner Habel, with his signed and stamped ownership, dated 1982, to the pastedown. His note of acquisition from 1981 is loosely enclosed. 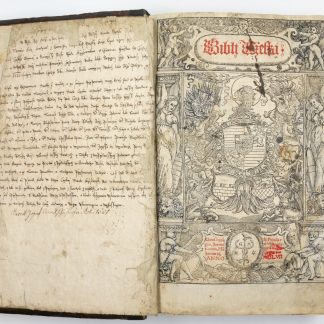