Rare work on Habsburgian Southeastern Europe, the principal literary effort of Sulzer, an Austrian infantry captain and jurist who in 1773 transferred to Walachia as a teacher of philosophy and law, married the daughter of the Kronstadt senator Joseph von Drauth and became one of the first modern writers on what is today Romania. His work was divided into two parts, of which only the first, present one (in three volumes) on the region's geography saw print; the second, historical section is preserved in manuscript at the Protestant Gymnasium of Hermannstadt (Sibiu) (cf. Wurzbach).

Bindings rubbed and bumped; some foxing and browning throughout; strong brownstain on pp. 29-33 of vol. II (affecting text). Formerly in the library of the important Polish noble family of Zamoyski with their bookplates and stamps. Several later Hungarian library stamps; last in the library of the Viennese collector Werner Habel (1939-2015) with his handwritten and stamped ownership, dated 1977, to pastedowns. 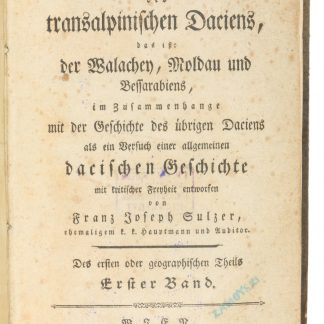