An extract from Büsching's (1724-93) famous geographical description published between 1754 and 1792: a monumental work consisting of a total of 13 parts, 10 of which were written by the German theologian and geographer. The author's "merit lies in providing a description of the earth on a scientific foundation. Even if he only captured it political-statistically without discussing it physically, that is to say, from the historical and not from the natural scientific point of view, his work remains a great achievement" (cf. NDB). This extract is based on parts 1-4, treating Europe and Northern Asia, and was issued in 1762 so as to reach audiences unable to afford the complete edition. It contains descriptions of Denmark, Sweden, Russia, Poland, Prussia, Hungary, the Ottoman Empire, Italy, France, the Netherlands, Switzerland, Spain, Great Britain and Ireland. About half the volume, however, is dedicated to Austria and Germany. The descriptions contain geographical data as well as historical, administrative and economic remarks. Apart from informing the reader about a large number of towns in the given territories, the author also mentions important monasteries, such as St. Gallen, Worms and Fulda. The engraved view of Wiltzburg (with Weißenburg and Ellingen in the background) is preserved only as a fragment. Büsching's extensive work was continued by other hands until well into the 19th century.

Spine somewhat worn, small tear in the final page, a little brownstained in the front, otherwise well preserved. From the library of the Viennese collector Werner Habel, with his ownership stamp to the front pastedown. Note of acquisition, dated 1975, loosely inserted. 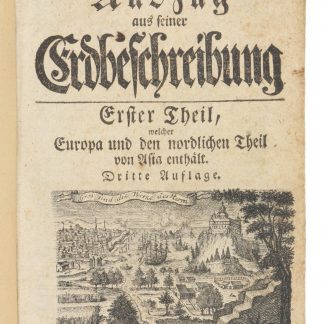