An Embassy to Persia, and a description of the Most Serene Republic

Altenburg in Meißen, for Henning Grosse (in Leipzig), 1610.

I: Rare account of the embassy undertaken by Stephan Kakasch (Khakas) and Georg Tectander von der Jabel from Prague to the Persian court in the year 1602, in response to an embassy sent to the Habsburgs' court two years previously by Shah Abbas. The travellers passed through Bohemia, Silesia, and Moscow (to which a large part of the narrative is dedicated) before reaching Persia. Kakasch, the ambassador, died near Astrakhan, but the journey was successfully completed by his aide Tectander, and in January 1605 the report was officially presented to Emperor Rudolph. The present edition is a rare re-issue of the one published by Grosse in the previous year. The plates include views of Moscow and Breslau, the audience with the Grand Duke of Moscow, as well as Persian and Tatar costumes. Complete with all illustrations as called for by VD17 and the table of plates at the end (though some copies are known to have included as many as 8 plates).

II: First edition under this title; very rare: an extensively revised and expanded version of the author's "Venediger Herrlichkeit" from 1602. The famous historiographer and linguist Hieronymus Megiser (1554-1618/19) spent almost a year at Padua, from there making frequent journeys throughout Italy as far as Sicily and Malta. His book covers not only the history of Venice and its most important buildings and landmarks, but also provides information on the city's political and financial administration. The views include Venice, Padua, Verona, Bergamo, Udine, Palma, Sibenik, and Corfu; other plates depict Venetian curiosities such as a gondola and a Dogal procession. The appendix (with its own title-page and colophon) gives a chronology of the Most Serene Republic.

Some browning throughout due to paper. Appealing binding well preserved, though wanting clasps. Acquisition note, dated 1711, on lower pastedown, as well as a later note, according to which the volume was purchased for 40 Marks from Breslauer in Berlin in 1914. Ownership "Vi. Kringer / [18]59" on front flyleaf. Last in the library of the Viennese collector Werner Habel (1939-2015) with his handwritten and stamped ownership, dated 1975. 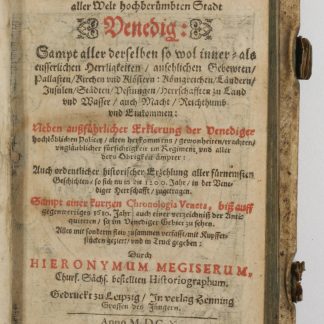