[Walther, Bernhard. Private-law treatises, the code of civil procedure of Lower Austria and other legal texts].

A unique compilation of 16th century Austrian legal texts, most of them by the lawyer and chancellor Bernhard Walther (1516-84), the "father of Austrian jurisprudence" (cf. Luschin-Ebengreuth 1896). Includes his code of procedure of Lower Austria (ordinaria and extraordinaria), of the lex familiae, an instruction for law students, the fees of the Lower Austrian chancellery, a copy of imperial privileges confirmed or newly issued by Emperor Charles V in 1522, an order by the Landmarschall of Lower Austria, Georg von Puchheim (died 1531), the rules for court hearings, including the hearing of witnesses, and regulations for procurators. Followed by 14 of Walther's famous 15 private-law treatises, omitting the one on familial trees. The treatises were edited and published by Max Rintelen in 1937, who, however, fails to note this manuscript source in his index of extant codices.

Binding somewhat brownstained, a little scratched. Cover warped, upper hinge starting. Paper evenly browned and brownstained throughout. Small tears to a few pages, mostly affecting the lower margins. Tear in f. 76 repaired with sealing wax. Flaws at the margins of the first page, rebacked with paper. Signs of use: some passages crossed out, old marginal annotations by another hand. Last in the library of the Viennese collector Werner Habel, with his signed and stamped ownership to front pastedown, dated 1978. 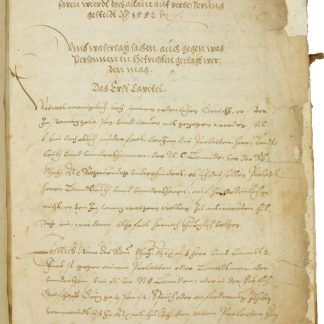