Eighteenth-century edition of the well-known historiographic work on the life and achievements of Alexander the Great by the Roman historian Quintus Curtius Rufus, containing the surviving parts of his history, beginning in 333 b.C. by describing the famous episode of the Gordian knot and finishing with Alexander's death and an outlook on the difficulties of his succession. The editor Christoph Cellarius includes footnotes and annotations to the text, comments on Rufus's credibility, and three maps: two show the Asian continent as far as India, while one depicts Greece and Asia Minor.

18th and 19th c. labels of the Piarist library in Krems to front cover and pastedown, their stamp to the title-page. Contemporary ownership to pastedown stricken out.

Variously browned and brownstained. Signs of use; several passages on pp. 527-530 underlined in ink. From the library of the Viennese collector Werner Habel, with his stamped and signed ownership to flyleaf, dated 1985. 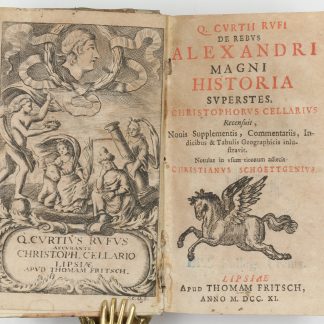