[Arabic epistolography]. A collection of more than 170 autograph Arabic letters.

A vast ensemble of handwritten letters in Arabic, assembled by the Franco-Algerian typesetter A. Duchâteau who used the collection both to perfect his command of practical Arabic in various local dialects and as a typographical style guide. Most of the letters were written by local dignitaries, including Beys, Kaïds, Sheikhs, provincial leaders and village chiefs. To obtain them, Duchâteau must have drawn upon various sources such as his own relations and other Algerian families, the French community, and the military. About a third of the letters include Duchâteau's French translations or at least notes about their origin, giving dates or details of their content or identifying the recipient.

Duchâteau worked as typesetter for the Algiers-based "Bastide" printing house in the early 1850s. Specializing in Arabic typography, he was especially close to Louis-Jacques Bresnier (1814-69), the first professor of Arabic in Algiers. It was Duchâteau who attended to the printing of the Arabic parts of Bresnier's chrestomathies and language guides, and it is apparent that the album also served as documentation for the professor's own publications, such as his "Chrestomathie arabe: lettres, actes, et pièces diverses" (1857). In the preface to his "Cours pratique et théorique de langue arabe", published by Bastide in 1855, Bresnier explains that his work could only be realized thanks to the talent of Duchâteau: "Two modest and excellent artists, Messrs. Ch. Portmann, lithographer, and A. Duchateau, an Arabic typesetter, understood and supported the author's work with remarkable intelligence and skill." - Some of these letters are of great historical interest, enabling us to trace in them the frequently poorly-documented history of Algeria between the late 18th and mid 19th century. The ensemble includes, inter alia, a letter from the Bey of Constantine, Hussein Bey (1807); letters addressed to Napoleon III, who is referred to as "Sultan" and "Lord Prefet"; a letter from a brotherhood leader asking permission to bring a number of faithful into his Zaouira; a document regarding the prisoners of Constantine; a letter from Mufti Hanefi of Constantine requesting the replacement of the hezzab of the mosque; letters from the interpreter Ismael Ben El Had Mohammed Amin El Sekkat, from Kaïd Belkaum Ben Minia, from Messrs. El Hadj Merouan & El Hadj ben Fouka, from Sid Said EI Hadj, a regional chief (1817), several letters to and from physicians, letters related to invitations, festivities and gatherings, requests to the authorities for intervention, commercial letters, and letters of thanks. A single letter in Hebrew is also included. Inserted at the beginning are 6 lithographed leaves of letter specimens as used by Bresnier in his courses, annotated by hand (likely that of Bresnier himself) with extensive remarks in French and Arabic on the vocabulary and phrasing. 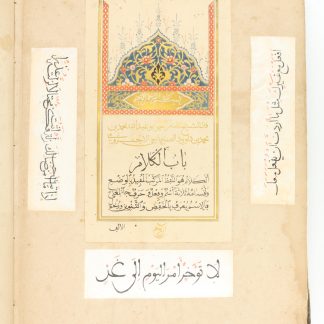