Committee on Foreign Affairs. New Perspectives on the Persian Gulf. Hearings before the subcommittee on the Near East and South Asia of the committee on foreign affairs, house of representatives, ninety-third congress, first session. June 6, July 17, 23, 24, and November 28, 1973.

Document printed by the government of the United States of America, concerning several hearings of witnesses of events in the Middle East and South Asia, especially concerning "arms sales or pending arms deals with some of the oil-rich countries of the Persian Gulf, especially Iran, Saudi Arabia, and Kuwait" (p. 1). Included are a list of witnesses, their statements, tables listing military transactions and import/export numbers, and relating documents, including memorandums, biographies of the witnesses, letters and articles. Inserted is a letter from Eric Barnes to the Congressman Kazen, requesting a copy of the present book. A very good copy. 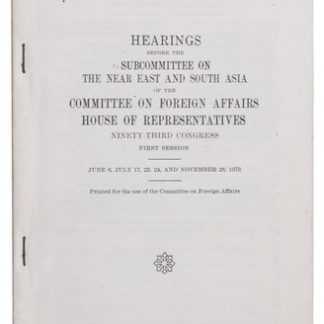 Sie sehen: Committee on Foreign Affairs. New Perspectives on the Persian Gulf. Hearings before the subcommittee …Washington, 1973. € 2.500,00
In den Warenkorb